The gods smiled on Hubert de Givenchy when they blessed him with Audrey Hepburn as a close friend and muse. In the 1950's and 60's, when Hepburn was at the height of her powers—defining chic for a world of admiring women—Givenchy dressed her both on- and off screen. And in a marketing move that has stood the test of time, he featured his gorgeous pal in his perfume ads, too. The talented Givenchy was lucky that way: First Lady Jackie Kennedy also was photographed often in his trim coats with cropped sleeves and his slim, judiciously unadorned L.B.D.s.

Givenchy, born in 1927, was one of a handful who studied at the knees of the greats in the creative hotbed that was postwar Paris. He worked alongside Pierre Balmain and Christian Dior at the house of Lucien Lelong, then honed his skills as an assistant to Elsa Schiaparelli. In 1952, Givenchy founded his own house, with an accent on polished separates for a modern-day woman. The look was one of understated chic—feminine, but not flamboyant.

In 1988, Givenchy sold the company to the French conglomerate LVMH, retiring seven years later. The peripatetic John Galliano was Givenchy's immediate successor; he was followed by Alexander McQueen and then by Julien Macdonald, who helmed the house from 2001 to 2004. The current creative director is Riccardo Tisci. In his plaid shirts and sneakers, he may seem like an unlikely heir to the impeccable Givenchy himself, but Tisci has been steadily winning over the critics.

Today Givenchy Fashion house have a new designer. His name is Riccardo Tisci.


Before signing on at Givenchy in 2005, Riccardo Tisci was a relative unknown in the fashion world. He was a Central Saint Martins graduate with a stint at Antonio Berardi on his résumé—and not much else. Clearly, his appointment was a gamble for LVMH, Givenchy's parent company.

Born in Taranto, Italy, in 1974, Tisci showed his very first collection, under his own name, in Milan in the fall of 2004. Within a year, he made quite a leap, to the Fall 2005 Haute Couture collection he created for Givenchy. Critics said his debut was not bad, but they didn't lay any laurels at his feet, either. To the relief of editors (and, most likely, Bernard Arnault, LVMH's chieftain), Tisci began—after a slowish start—to move away from his early high-concept presentations and to turn to a traditional runway format. Audiences began to give his clothes their full attention.

And the young Italian has delivered a certain graphic strength. If Audrey Hepburn, with her rake-slim and unfussy femininity, was the poster child for Hubert de Givenchy back in the day, modern waifs are finding themselves drawn to Tisci's darkly romantic, slightly melancholic designs.

In 2008, Tisci's duties were expanded to encompass Givenchy's menswear line, too, putting him in charge of design for the entire brand. The powers that be clearly see good things on the horizon. 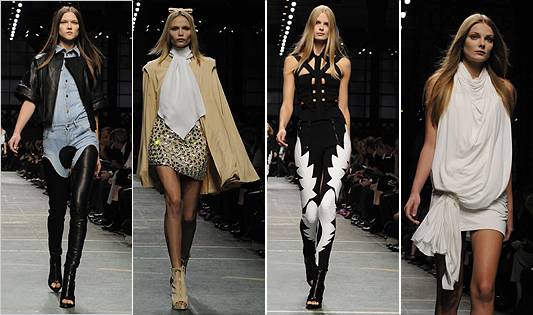 Email ThisBlogThis!Share to TwitterShare to FacebookShare to Pinterest
Labels: DESIGNERS