How art and fashion became BFFs

Chanel at Frieze, Prada's street vibe, Burberry's latest Hockney look – designers are in an arty frame of mind. Here are the latest love-ins. 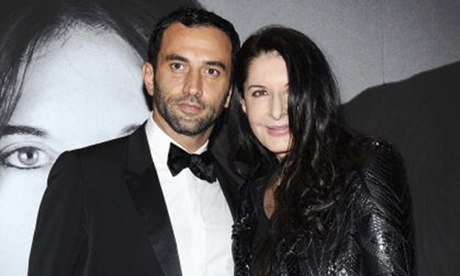 Riccardo Tisci, artistic director of Givenchy, with his muse Marina Abramovic. Photograph: Jamie Mccarthy/WireImage
When Jay-Z staged the Picasso Baby gallery setup for his "performance art film" (aka video) back in August, Marina Abramovic was one of the first through the door. The 66-year-old performance artist is a favourite of fashion's power players – and it's nothing to do with the episode of Sex and the City she inspired or, if we're honest, any of her art. Abramovic is one of Givenchy designer Riccardo Tisci's muses and regularly wears his clothes accessorised with red lipstick and a long plait in a rather fabulous way. And that's something fashion – and art-inclined hip-hop – can appreciate. 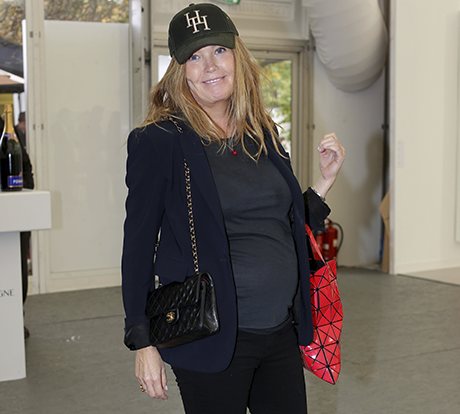 Chanel at Frieze: the quilted shoulderbag was the style of choice. Photograph: Graeme Robertson for the Guardian
October's Frieze is now firmly marked on fashion's annual calendar, with the art world's style a great tonic after four weeks of front rows eyeing up each other's outfits. There's one element that these two groups no doubt have in common – a penchant for Chanel's classic 2.55 handbag. At this year's Frieze, the quilted, chained shoulderbag was the style of choice in an environment where designer accessories come as standard. While the shoulderbag is currently beta in fashion circles (see the oversized clutch), the art crowd feel differently. With Karl Lagerfeld delving into art as inspiration for Chanel's spring collection, maybe they're on to something. 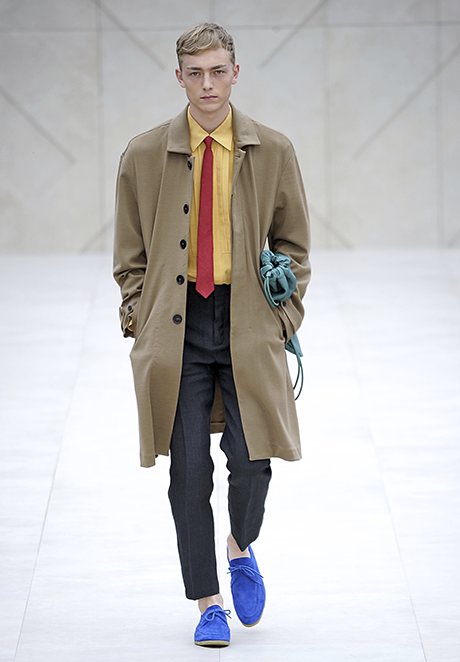 The Hockney look on the Burberry catwalk. Photograph: Victor Virgile/Gamma-Rapho via Getty Images
Every man can learn a lot by looking at David Hockney's wardrobe. The tousled blond hair. The owlish glasses. The hint of a dandy in primary-coloured tailoring. The Yorkshireman has long been held in esteem by fashion. Burberry's Christopher Bailey is a fan – referencing the artist in collections dating back to 2005. The brand's most recent collection had those brights mixed with cosy sweaters – a very Hockney outfit indeed. A notable mention here must also go to Andy Warhol – Hockney's rival for the Most Fashionable Male Artist award. His fright wig, skinny black trousers and Breton top add up to what we call a Strong Look.


Prada and the street artists 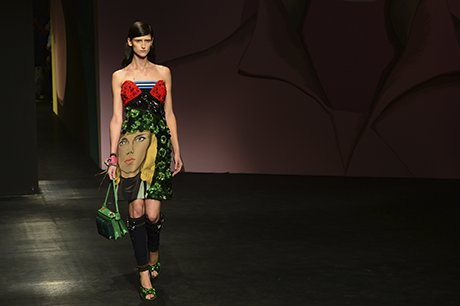 Prada's street-art designs for SS14. Photograph: Giuseppe Cacace/AFP/Getty Images
If Prada always namechecks real women – the stronger the better – the Italian brand's spring collection also delved into the world of street art. The label commissioned six young artists, whose work appeared on the walls of the show venue but also over vibrant dresses, coats and bags, sometimes with jewelled panels and always with striped legwarmers. The result? A kind of hybrid of investment pieces – bonding this season's "it" designs with what is effectively limited-edition artwork. This is a very Prada conceit – and one that will no doubt appeal to the strong women who wear the designer's clothes. 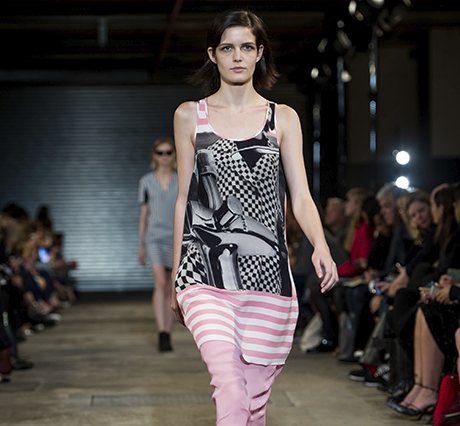 London designer Richard Nicoll is influenced by Linder Sterling's provocative take on pop art. Photograph: Ian Gavan/Getty Images
The artist who made artwork for the sleeve of the Buzzcocks' 1977 single Orgasm Addict – a naked woman with an iron for a head – might not sound like the obvious candidate for a fashion collaboration but she has been partnering with London designer Richard Nicoll since 2009. It works. Linder's provocative take on pop art – collaging everything from 60s pornography to household appliances and flowers – brings an edgy kind of femininity that stands out from your average ditsy floral. A unisex line, S/He, is in the works, while the latest print features a mod-ish girl overlayed with a chrome tap. Sounds weird, looks great. 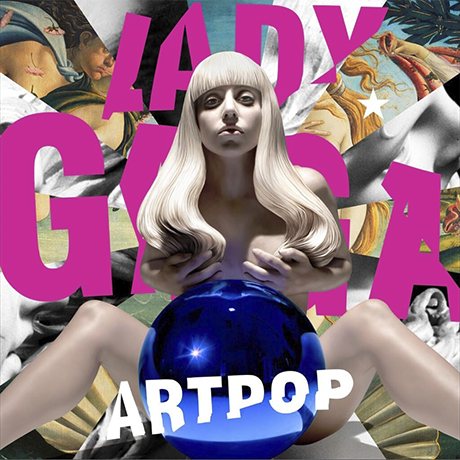 Lady Gaga's Artpop album cover by Jeff Koons
While Miley Cyrus is busy redefining sleaze with photographer Terry Richardson, other pop stars are forming brand-positioning alliances of their own, by paying artists lots of money to work with them. Katy Perry – usually more associated with hangover-inducing E-number brights – has wheeled in Ryan McGinley to shoot the cover of her new album, Prism, and it has all the hazy romance of the photographer's work. Lady Gaga – not familiar with the idea of "over-the-top" – has tapped the like-minded Jeff Koons, who made a sculpture of her for the cover of her upcoming ARTPOP. Arguably, it's a match made in heaven. 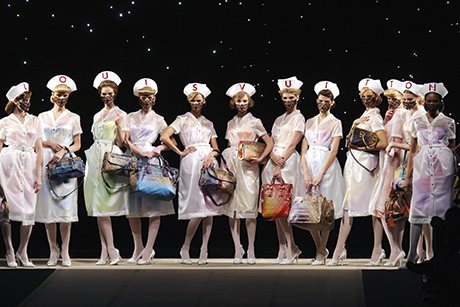 Marc Jacobs for Louis Vuitton: based on Richard Prince's Nurses series of paintings. Photograph: Pierre Verdy/AFP/Getty Images
Leaving Louis Vuitton after 16 years will allow Marc Jacobs to concentrate on his own label – and bolster his already significant art collection. He is the proud owner of works by Richard Prince, Ed Ruscha, Damien Hirst and John Currin, and has also been a pioneer when it comes to working with artists for his clothing collections. Stephen Sprouse, Takashi Murakami and Yayoi Kusama have been among his collaborators and spring 2008's Louis Vuitton collection was based on Prince's Nurses series. In Jacobs' world, art and fashion are BFFs already. 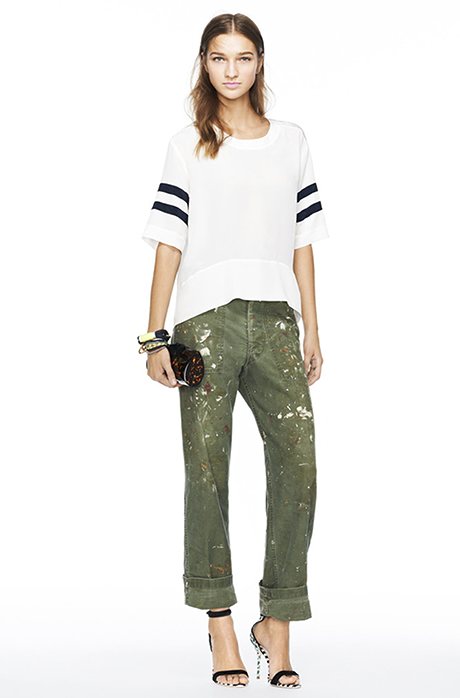 J Crew pays homage to painters with its splattered trousers. Fashion's current preoccupation with art is effectively the death knell of the minimalist look – most art (Donald Judd and his ilk aside) is about getting messy. This new abandon is evident even at Céline – once home of no-spillage minimalism – where paint swooshes filled the spring collection. While a Dior campaign out now features the very-refined Marion Cotillard contrasted against drips of paint on a wall, the paint splatter of an artist's studio clothes is set to become the motif of 2014. As well as Céline, a pair of splattered trousers in the J Crew collection already have a buzz about them and Martin Margiela has a pair of very smart brogues covered in paint. Messy, but pleasingly so.